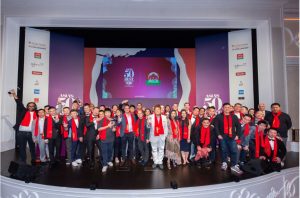 Odette ranks first as well at the Top25Restaurants.com/Singapore guide by Travelindex and the trusted Restaurant Rating Index. Top25Restaurants is the world’s first restaurant guide based on AI (articial intelligence and machine learning).

The 2019 list of Asia’s 50 Best Restaurants, sponsored by S.Pellegrino & Acqua Panna, was announced at an awards ceremony at Wynn Palace, Macao. The 2019 list reflects the diversity and vitality of the ever-evolving Asian gastronomic scene, featuring 10 new restaurants, including a first-time entry from Malaysia (Dewakan, No.46) and a new restaurant in the Philippines (Toyo Eatery, No.43), a country last represented in the list in 2017. Host destination Macao counts two restaurants with Jade Dragon rising eight places to No.27 and Wing Lei Palace debuting at No.36.

Foodies, Chefs and all fine dining lovers now await the new rankings at Top25Restaurants Guide Asia by Travelindex and the trusted Restaurant Rating Index. Top25Restaurants is the world’s first restaurant guide based on AI (artificial intelligence and machine learning).

Individual Country Awards:
Japan
Japan leads the 2019 list with 12 entries. Fronting this group is Den (No.3), earning the title of The Best Restaurant in Japan for a second consecutive year. Den’s charismatic chef, Zaiyu Hasegawa, was also rewarded for his innovative approach and named the 2019 recipient of the Chefs’ Choice Award, sponsored by Estrella Damm, the only award voted for by the chefs of the Asia’s 50 Best Restaurants 2019 list to recognise a peer making a positive impact on the restaurant scene. The top 10 also includes Japan restaurants Florilège (No.5), Narisawa (No.8) and Nihonryori RyuGin (No.9). Sazenka and Sugalabo, both in Tokyo, are newcomers to the list, landing at No.23 and No.47 respectively.

Thailand
After holding the No.1 spot for four consecutive years, Gaggan in Bangkok moves to No.2 while retaining the title of The Best Restaurant in Thailand. Entering the list at No.16, Gaa in Bangkok has double reason to celebrate. As well as claiming the Highest New Entry Award, executive chef Garima Arora is named elit™ Vodka Asia’s Best Female Chef 2019.
Among the remaining six Thailand entries, Sühring holds at No.4, Bo.Lan rises 18 places to No.19 and Paste climbs three places to No.28 while Sorn, specialising in Southern Thai cuisine, is a new entry at No.48.

Singapore
Singapore claims seven entries on the list, including newcomer Nouri making a bow at No.39 and longtime favourites Burnt Ends and Jaan rising to No.10 and No.32 respectively. The remaining Singapore restaurants are Les Amis (No.33), Waku Ghin (No.40) and Corner House (No.49).

Greater China
Ultraviolet by Paul Pairet (No.6) in Shanghai is named The Best Restaurant in China. Hong Kong counts nine restaurants on the list, including The Chairman (rising from No.22 to No.11) and first-time entries Vea (No.34) and Seventh Son (No.44). Soaring 25 places to No.15, modern French bistro Belon is crowned with this year’s Highest Climber Award. Ascending 11 places to No.7, Mume in Taipei clinches the title of The Best Restaurant in Taiwan, besting two-time winner, Raw (No.30).

Regional
Locavore (No.42) in Bali earns dual honours. As well as holding the title of The Best Restaurant in Indonesia, Locavore wins the Sustainable Restaurant Award in Asia, presented to the restaurant with the highest environmental and social responsibility rating, as determined by audit partner Food Made Good.

Italian chef Fabrizio Fiorani developed his pastry skills in the kitchens of such acclaimed restaurants as La Pergola in his native Rome and Enoteca Pinchiorri in Florence. Expanding his horizons, he travelled to Dubai and Portugal before settling in Tokyo. His desserts seamlessly complement chef Luca Fantin’s contemporary Italian tasting menu and Fiorani’s first cookbook, Tra L’Onirico e Il Reale (Between Dreams and Reality), was published in 2018.

Other individual award recipients include JL Studio in Taichung, Taiwan, earning the Miele One To Watch Award for its modern interpretations of Singapore cuisine. Celebrated chef Seiji Yamamoto, of Nihonryori RyuGin in Japan, is the inaugural winner of the American

How the Asia’s 50 Best Restaurants list is compiled:
The list is created from the votes of the Asia’s 50 Best Restaurants Academy, an influential group of over 300 leaders in the restaurant industry across Asia, each selected for their expert opinion of Asia’s restaurant scene. The panel in each region is made up of food writers and critics, chefs, restaurateurs and highly regarded ‘gastronomes’. Members list their choices in order of preference, based on their best restaurant experiences of the previous 18 months. There is no pre-determined check-list of criteria, but there are strict voting rules.