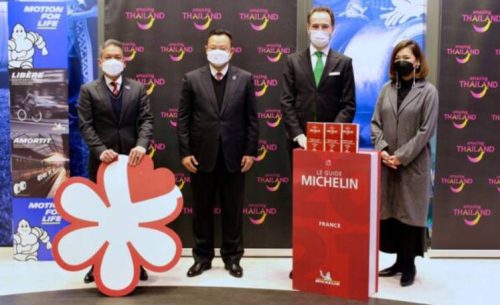 Bangkok, Thailand, December 3, 2021 / TRAVELINDEX / Produced both digitally and in print, the prestigious bilingual Thai and English culinary guide will see amazing destinations and a new service award added. The Ministry of Tourism and Sports and the Tourism Authority of Thailand (TAT) are pleased to announce that the success of The MICHELIN Guide Thailand over the past five years, since its launch in 2017, has resulted in the project being extended for another five years from 2022 to 2026 guaranteeing continued promotion of gastronomy tourism in Thailand to the highest international level.

• Discover the Thailand’s and Asia’s Best Restaurants at Top25Restaurants.com

Mr. Yuthasak Supasorn, TAT Governor, said, “The MICHELIN Guide Thailand in its four editions so far has been received tremendously well, and has been instrumental in bringing Thailand’s world-class culinary scene to the world. The next five editions to come under TAT’s expanded partnership with The MICHELIN Guide will aim to build on that success and promises a number of new elements. This will see its search extended to three more provinces, including one in the Northeast, and the introduction of a new award category – the MICHELIN Guide Thailand Service Award presented by TAT will recognise outstanding service personnel in the culinary and hospitality industries.

“At the same time, The MICHELIN Guide Thailand will play an important role in helping drive the government’s Creative Economy policy under the Bio-Circular-Green or BCG Economic Model. It will do so by enhancing the image of Thailand globally as a leading tourism destination through the promotion of Gastronomy Tourism, and in a sustainable development manner.”

• Discover the Thailand’s and Asia’s Best Restaurants at Top25Restaurants.com

Mr. Manuel Montana, President of Michelin East Asia and Australia, said, “The extended partnership will allow us to provide further support and contributions to Thailand’s gastronomy and tourism sectors – a much-needed morale booster for local entrepreneurs, especially during and after the pandemic. With the MICHELIN Guide’s active presence through both traditional and digital channels on a global scale, we will continue to enhance the exposure of Thailand as a world-class culinary destination, as well as help amplify the rebound of Thai tourism after the Covid-19 crisis. Additionally, in line with the Thai government’s policies around the Bio, Circular and Green economy, The MICHELIN Guide’s efforts to raise awareness and promote sustainability in the culinary and hospitality sectors, will benefit not only the country’s economy and its people, but also the planet as a whole.”