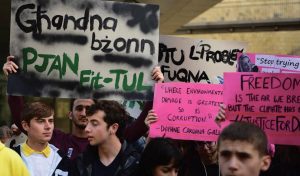 Valetta, Malta, April 30, 20 /TRAVELINDEX/ by Julia Farrugia, Malta Minister for Tourism and Consumer Protection – Climate change is a global issue but, as a country, we cannot be passive. With the right policies and decisions, we can make our country more sustainable and at the same time we will be encouraging our stakeholders to do the same.

Very recently through a first-of-a-kind event, we have broken new ground by bringing the discussion on climate change to the tourism industry with a clear objective in mind: that of commencing a process of making travel more climate friendly by retaining and even increasing its socio-economic returns without the harmful side effects of its carbon emissions.

We are privileged to have had here among us an international panel of distinguished and multi-skilled experts from a rich variety of backgrounds. They have been with us for a whole week and have contributed to a think tank on climate-friendly travel organised by SUNx Malta, a joint initiative between the Green Growth and Travelism Institute and the ministry for tourism aimed at championing an agenda for climate-friendly travel at a global level while raising some serious concerns.

There are concerns that, unless the whole world takes collective action on the existential threat of climate change, the problems will only keep increasing until we reach a point of no return. That is why we have decided to act and push the Maltese tourism sector towards climate friendly travel through reduced emissions with the ultimate objective of carbon neutrality.

The fact that we have taken up this challenging mission has strong roots.

Malta has a strong tradition of spearheading initiatives of global environmental significance such as the initiative at the 1967 United Nations general assembly that culminated in the adoption of the 1982 United Nations Convention on the Law of the Sea and Malta’s action at the United Nations general assembly in December 1988 that inspired UN’s resolution on the urgent need to conserve climate in the interests of mankind by protecting it against negative man-made changes, and recognising climate change as a “common concern” requiring “timely action”.

This resulted in the newly conceived Intergovernmental Panel on Climate Change (IPCC) being asked to advise on the state of climate science and response strategies.

On the other hand, some have asked, why Malta? I would like to remind that we are an advanced island-state economy increasingly reliant on an expanding economic services sector and at the forefront of providing sound legislative frameworks for new technologies such as blockchain and artificial intelligence which are set to play a very important role in addressing climate change mitigation measures.

Also, we are one of the fastest growing economies within the EU. Malta has thus created a global institutional base for this activity by teaming up with SUNx to put travel and tourism climate resilience in the mainstream of global change. Through SUNx Malta, we are about to launch the 2050 Ambitions Register for travel and tourism companies and communities, linked to the United Nations Framework Convention for Climate Change NAZCA Register.

We are also just about to launch our plan to curate, with our Institute for Tourism Studies in Gozo, an educational programme aimed at eventually expanding to create 100,000 smart strong climate champions, across all UN states by 2030, to help companies and communities transform.

The creation of SUNx Malta is the start of a collective long-term transformation process, the start of a commitment and the start of tangible steps towards our quest for climate friendly travel as an imperative way of preserving all that we value.

While thanking the think tank experts for their valuable contributions towards this initiative, and the local stakeholders that have been supporting us, I look forward to more discussions and actions throughout the year, while reviewing the progress achieved and increase efforts to embed climate-friendly travel into our national and international futures.

First published at the Times of Malta here