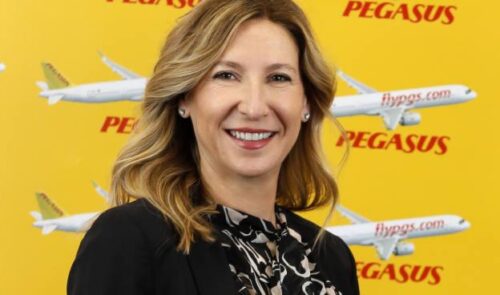 Istanbul, Turkey, Avril 4, 2022 / TRAVELINDEX / Mehmet T. Nane, who has been serving as CEO of Pegasus Airlines since 2016, became a Member of the Board of Directors at its Ordinary Meeting of the General Assembly held on 31 March 2022, and was elected Vice-Chairperson of the Board (Managing Director) following the decision by the Board of Directors. Güliz Öztürk, who has been serving as the company’s CCO since 2010, will succeed Mehmet T. Nane as CEO. Mehmet T. Nane and Güliz Öztürk will officially begin their new roles from 1 May 2022.

Mehmet T. Nane said: “I am delighted to be passing the CEO baton, which I received in 2016, to Güliz Öztürk, who has made significant contributions to the growth and development of Pegasus for many years. I wholeheartedly believe that she will continue to wave the flag of Pegasus brightly in the skies. This appointment holds great value and significance also as Güliz Öztürk is to become the first woman CEO of an airline in the history of Turkish civil aviation…” He continued: “The aviation sector has gone through a very challenging period both domestically and globally due to the pandemic. As part of the framework of my continued role as President of Turkish Private Aviation Enterprises Association (TÖSHİD), and my role as IATA Chair of the Board, which will commence in June, I will fight for the sustainable development of the civil aviation sector; whilst in my new role at Pegasus Airlines, I will continue to work tirelessly to reinforce the position of Turkish civil aviation as a rising star in the world, and to support the growth of our company as we forge solidly ahead.”

Güliz Öztürk said, “I am honoured to receive the baton from Mehmet T. Nane. As Pegasus Airlines, we have accomplished many firsts and pioneering projects under his leadership since 2016, and we have made our country proud many times in the international arena. Together with all my colleagues, we will work tirelessly to progress our company further and crown its achievements. Investing in two important areas will continue to be the architect of our success: technology and people. As Turkey’s digital airline, we will continue to offer digital technologies and unique innovations that will enhance the travel experience, with our approach that focuses on guest experience. Without compromising the basic principles of our business model, we will continue to manage our operations and activities with a sustainable environment approach. One of the issues on which we will also be most focused will be gender equality. We will make every effort, institutionally and individually, to contribute to the equal participation of women and men in all areas of social life and to enable women to express their full potential. As a company, we have been committed to gender equality for many years, and we have been at the centre of the struggle. This change is also proof of the importance our company attaches to gender equality.”

Mehmet T. Nane held positions in various business units at the Türkiye Emlak Bankası, Demirbank and Demir Invest between 1988 and 1997, respectively; then joined the Sabancı Group in 1997 and held positions, including Vice President of the Strategic Planning and Project Development department, Director of the Retail Group and General Secretary of Sabancı Holding within the Sabancı Group, until 2005. After serving as Teknosa Vice Chairman of the Board between 2000 and 2005, Teknosa CEO between 2005 and 2013, and CarrefourSA CEO between 2013 and 2016, he became the CEO of Pegasus Airlines in 2016.

About Güliz Öztürk
Güliz Öztürk is a graduate of Kadıköy Anadolu High School and the Department of Psychology at Boğaziçi University and completed the Advanced Management Program at Columbia Business School. She began her career at Turkish Airlines; from 1990 to 2003, Güliz Öztürk served as Manager of International Relations and Contracts, Alliance Coordinator, and Sales and Marketing Director at Turkish Airlines. During that time, she managed key strategic projects such as launching the first code-share flights, managing the alliance projects, launching the airline’s loyalty and bank card programs and its first website, as well as implementing online ticket sales for the first time. Between 2003 and 2005, Öztürk served as Aviation and Tourism Project Coordinator and Director of Human Resources at Ciner Holding. Güliz Öztürk joined Pegasus Airlines in 2005 as Head of Sales and Marketing, to manage the launch of the airline’s scheduled services, and in 2010, she was appointed Chief Commercial Officer (CCO), with responsibility for the commercial department, which includes Sales, Network Planning, Marketing, Revenue Management and Pricing, Cargo and Guest Experience.

A member of the Board of Advisors of Özyeğin University’s Faculty of Aviation and Aeronautical Sciences, Güliz Öztürk is also co-chair of the Women in Sales (WiSN) social project, which was established in 2019 to further gender balance in company sales departments, under the umbrella of the Sales Network platform.

About Pegasus Airlines
Pegasus Airlines was launched in 1990, and adopted a low-cost business model in 2005, upon its acquisition by ESAS Holding. As Turkey’s leading low-cost carrier, Pegasus offers its guests the opportunity to travel affordably and on young aircraft under the auspices of its low-cost airline model with the belief that “everyone has the right to fly”. Since 2018, Pegasus has adopted the motto “Turkey’s Digital Airline” and operates a network of 124 destinations in 47 countries, including 36 domestic destinations in Turkey and 88 international destinations; it operates connecting flights between Turkey and Europe, North Africa, the Middle East, Russia and Central Asia via Istanbul Sabiha Gökçen Airport in Turkey. With its approach that focuses on guest experience, Pegasus continues to offer digital technologies and unique innovations to enhance the travel experience. Pegasus manages its operations and activities with a “sustainable environment” approach.